Sometimes it is good to go to a wordless place, i.e. to not write prose or poetry. So here is a digital art instead that got made recently, during a no-objective-other-than-to-have-fun time.

What does it signify to you? What does it evoke in you? Does it evoke anything at all? Tell me. Then I will share where this image emerged from, what I called it, and how a friend interpreted it in a totally different way. 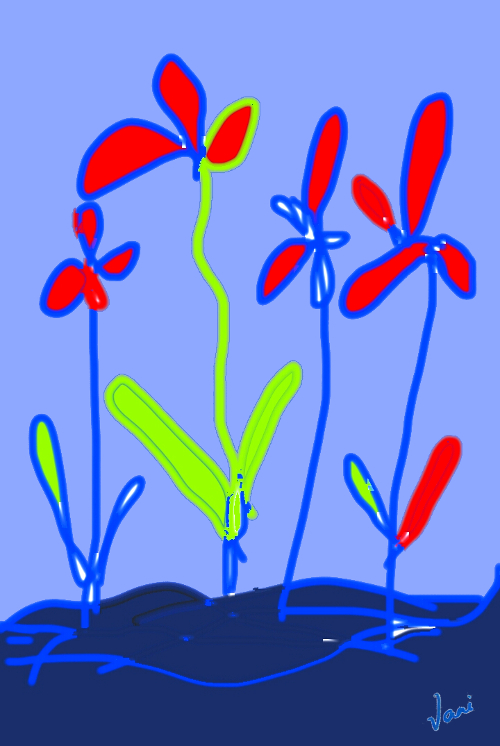 This digital sketch feels like a self-portrait on the days when I am unwell. It is an offering to anyone to make their own, when they feel broken but know that the beauty within is still intact.

When we sit down to meditate, eyes closed, bang! all the cacophony of our mind becomes apparent and most of the time is spent being buffeted around by all those innumerable thoughts and pointless inner dialogue. Walking is an age-old way of calming the mind. Scientists, writers and all kinds of creators through generations have turned to walking everyday as a means to keep their mind clean and efficient. It is easier than sitting meditation since untamed energy has some place to be used – in the physical movement. In fact walking meditation is officially a part of some meditation programs.

Coloring and writing is another kind walking meditation. The wrist and I go for a walk on the paper. Coloring being wordless, brings on a quiet of its own. My brother gifted me a coloring book last Rakhi and I took it up wholeheartedly as the designs by the artist Cynthia Emeryle were exquisite.

It was a rewarding experience as I got to experiment with making different color shades and combinations. Each time it was somewhat of a discovery for myself, what colors I will choose. While I kept coloring, I used to try and keep awareness on my breath. Of course the Brownian Motion of the mind would take over at times. However, doing this each day for so many days had a tangible positive impact on how I processed challenges, specially challenges of relationships. Often if I was having a hassle with someone, if I sat down and did some coloring for some time, it calmed me and I responded to the challenge differently than my first instinct.

These are 9.7 inch X 9.7 inch watercolor and brush ink artworks. Most took 5 or more mornings to complete. Price includes framing and shipping costs. If you are in Kolkata you will receive the painting framed and ready to hang. If you are elsewhere the painting will be mounted and shipped secure within boards. You will have to get the glass and frame added.

You can see bigger clearer pictures on Facebook. There are 24 in all! Here is the link to the store. This is a perfect way to bring joy and color to your space this festive season.

Exuberance! That is me.
Every time I paint you see!

Recounting the experience of my first ever art stall …

It is that boy’s eyes. That is the main reason why I am writing this post.

It was a wonderful day. Truly a blessing for me. An experience of directly reaching out and connecting with so many people via art, via the art stall I put up at the Diwali Dhamaka (a fun fest) in Manipal this weekend. At the stall, I was selling some of my paintings and also had all the paraphernelia ready for people to come and make a painting themselves.

Time and again I am pulled back to the memories and snapshots of those facial expressions of so many people and it fills me with so much gratitude and a sense of fulfillment. I feel amazed: “connecting with people in such a way is possible?!” Well yes, it is possible. It happened girl.

There was this small girl, 6/8 yrs or so, beautiful face, enticing smile. She kept hovering around my stall. Someone asked me finally, “Is she your daughter?” I said, “No, she is my admirer.”, and her permanent sweet smile got even brighter broader. She had been waiting for me to finish painting the pizza box side that I would give her for free to use as a bookmark.

A young man – a pharmacy college student here at the university. He was so enamored. He stood there and pondered long at the wares I had available. When he finally sat down to paint one himself, he pondered over that for long, along with his lady friend. I quipped a bit with this guy with a tip, “don’t apply your head so much” and later shared another painting tip with him too late, “backgrounds first, water first, coconut tree later.” That he was having a go at it with childlike enthusiasm despite being very clueless about it was so fantastic. Most adults do not do that. I realized later, I should have been gentle with him as I was with the children, rather than mocking joking.

I learned first-hand from a boy the impact of holding the paintbrush from far even when painting on a tiny canvas – and his mother had whispered to me that he does not know painting!

A lady admired the art on display and spoke of how she loves painting, has tons of art material at home but can only do copies. That is a struggle I have seen many adults have. Their technique is great, they can make beautiful paintings, but only copies. I told her to go home today and let her hand move any which way it wanted. She seemed inspired by my suggestions and said so too. I hope she tries.

There were many many wonderful expressions and human connections, saved in my heart. Each one precious and beautiful. I want to share each one with you, but will come now to those boy’s eyes. It is that boy’s eyes. That is the main reason why I am writing this post.

A small boy, again, maybe 6 8 10 years old. In school uniform, wearing glasses. Probably the first child I have seen here wearing glasses here in Udupi-Manipal, for that feature stands out in my memory, apart from his eyes. There was something troubled about it, his eyes. He came again and again and admired the stall, asked me how I paint like this (to which I wish I had an answer that would have soothed him and brought a happy smile to his face).

He came again and said “I have come to watch you paint.” I offered several times to him, “would you like to paint?”, he shook his head. After my nth asking, he said, “some other time.”. There was something very adult about the way he said “some other time”. It was sad.

He came again with his elder sister, a smartphone and a request expressed by his sister and not himself, even though he had been talking to me so far.

“He wants to take photos of the paintings.”

I said sure, and he took some photos of some, individually.

Whatever it was that was touching him so intensely, I hope and pray it finds self-expression.

That sounds like a sombre boy and encounter, but the whole day was a very happy art play day. Several dreams and wishes fulfilled: to sell my paintings, to share a “Art Play Place” with people, to earn some money after a hiatus of some 2.5 years.

Digital Art. Made first in MS Paint and then re-implemented in Inkscape.

My ancestors came from Rajasthan. Maybe they came from Sub-Saharan Africa. I have never seen the hot desert sand sinking into darkness, but they had. So I guess it is in my genes and that is how this image came about to be!

Made first in MS Paint and then re-implemented in Inkscape for resolution independence and a tad bit more sophistication. 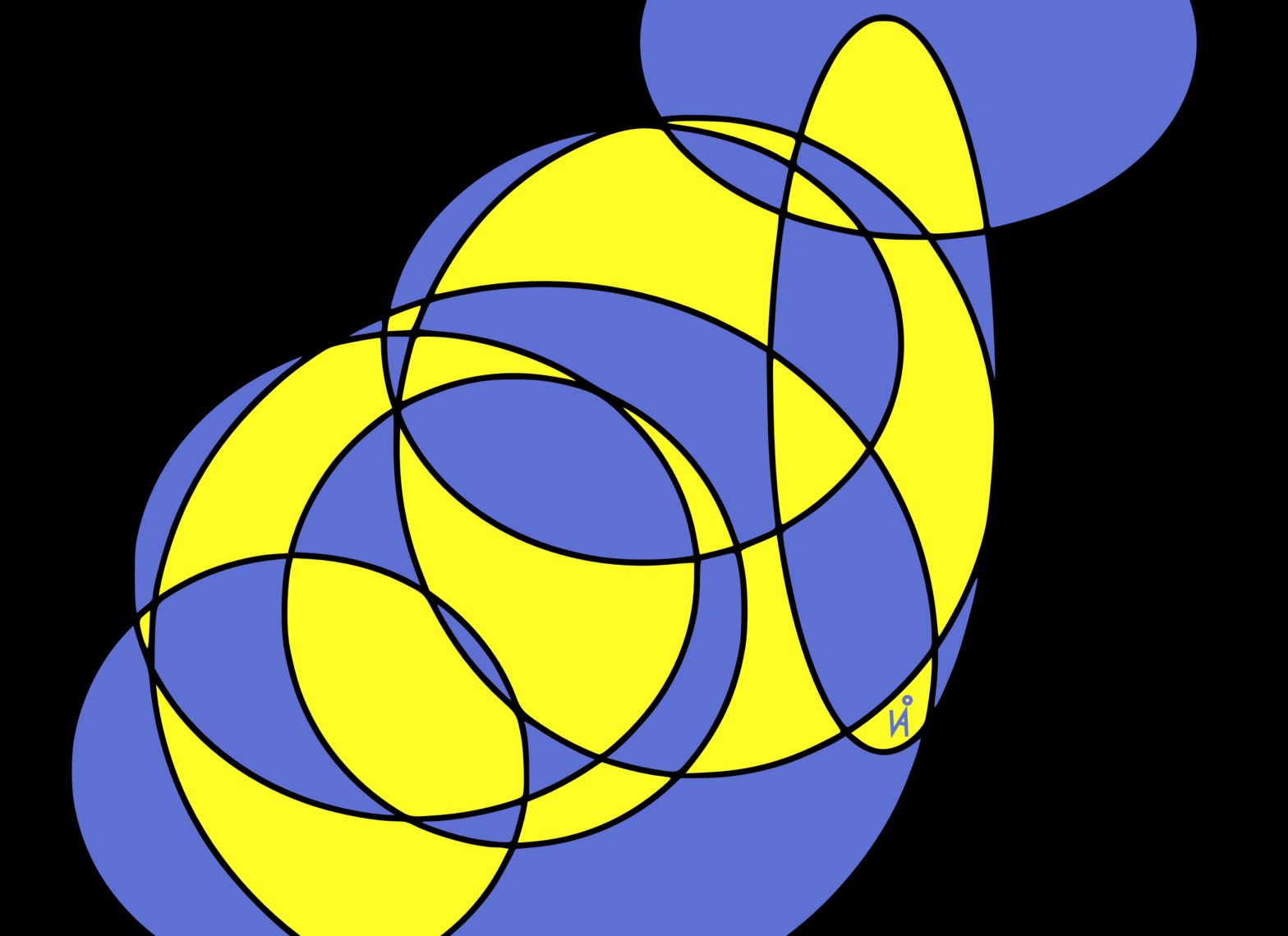 Resolution time: No more emotional eating. No silly starving either.