Your age is the same, my love.
Still the same innocent child.
You were born, who knows when.
You seek what you seek.

For that which you will not get —
Let your heart grieve.

Then, you shall receive. 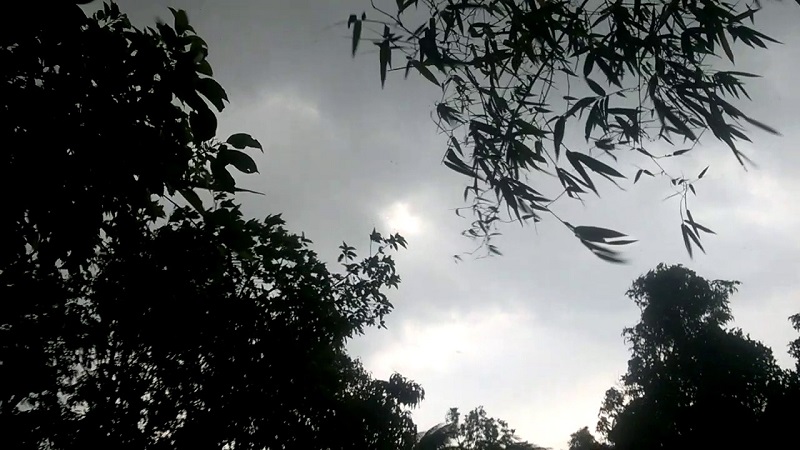 We all want conducive, beautiful environments of laughter, joy and ease. Spring is beautiful.

Wherever you are, know how you stand, in what capacity you stand. Within yourself, always stand in full capacity.

Be kind and gentle to yourself. Be true.

Image taken from YouTube: Kaal Boishaakhi Jhor . Kaal Boishaakhi are storms that come in the April season in Bengal. It is wonderful and gorgeous for those who have good homes. It must be what it must be for those living outside.

This digital sketch feels like a self-portrait on the days when I am unwell. It is an offering to anyone to make their own, when they feel broken but know that the beauty within is still intact. 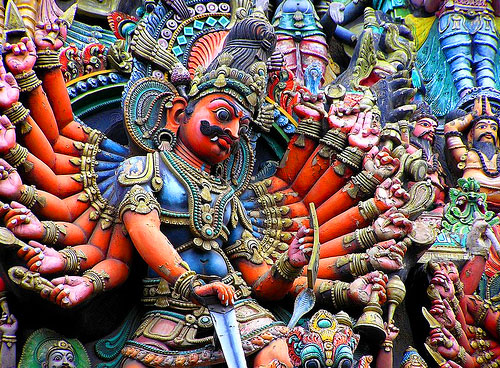 It was a personal duel between me and my teacher. She did not view it as such. My high-school teacher most probably was not even thinking of me. She was just doing her job, setting a Physics paper for the final exams. I stayed up the whole night studying, preparing. Not out of tension, not because I wanted x marks. I viewed it as a personal duel between me and my teacher, and I was enjoying myself thoroughly. I was having fun. It was the only time when I did an all-nighter.

Of course he would get mad at Vibhishan. “Tejo-vaddha” it is called, when someone tries to shake our resolve and focus — and Raavan would have none of it. This happens at times. We worry about safety, but fail to honor the spirit.

“This is not the proper thing to do. We will all perish. Raam is God incarnate.”, Vibhishan said. It makes sense from a conventional perspective, especially if you are operating from the conventional rules of right and wrong. This article is, however, about the other perspective. Raavan knew of the consequences well — erudite and an ardent devotee that of Shiv that he was. So what if this, that and the other will get destroyed. He didn’t give a hoot about the body getting destroyed. His spirit soared. That is what he wanted — a good hard knock with the one whom he not only worshiped, but who he had started thinking of as his buddy. He wanted light (Raam) to come and penetrate the very core of darkness, his belly. He wanted it.

There is deep satisfaction in being destroyed at the hands of the one’s love.

All this talk of victory of light over darkness is a half story. What victory is there to be had? They are equals and they love each other. They are langotiyaa-yaar (buddies from when they were in their nappies) — light and dark. They are wedded to each other (Kali and Shiv), one willing to lay itself down for the other. Till we eulogize only one and not the other, we are doing gross disservice to ourselves. For the light and the dark in us are both equally divine, equally wise, equally powerful — and equally desirable.

“He was evil. He was filled with pride. Dambh“, people say of Raavan. That sounds superficial to me. If you are the best, you are going to say you are the best. Our reality is not half divine half evil, satan and God at war with each other. Our reality is already fully-divine. We slash ourselves into half and say this is good, this is bad. It is self-hatred.

My right hand weakens during MS attacks. During this time I fall back on my left hand, for eating, for writing, and various other tasks. In the process I have become somewhat ambidextrous and have learnt of the deep wisdom and power that resides in connecting with the ‘other’ hand. We do gross disservice to our self by splitting our self into good and evil, desirable and undesirable.

The way to ‘kill’ evil is to recognize there is no evil. All forces play an extremely crucial role in the scheme of things. What we consider evil, is something beautiful and divine in us seeking acknowledgement and acceptance. When we consider any aspect of our self as undesirable, as an individual, family or society, then that thing rises further taking on grotesque proportions.

The should, should-not teachings of dharma talk of shreyas (what is good for you), and preyas (what is dear to you and you would rather do), as contrary things. We learn that we must choose one over the other – that we should get over our desire to do what is preyas and choose the shreyas instead. This again is an incomplete perspective that causes a horrible split within. Our good lies exactly where our joy lies. Self-awareness makes us know what is truly dear and preyas to us, and how it can take us to what is good and shreyas for us. But we go about denying our self.

While we celebrate Diwali and the victory of light over darkness, it is important to remember to celebrate Kali too – the seat of the dense dark and the power it holds. The darkness in us, the times of challenge, depression, even delusion – hold immense power within, which can only be tapped when we go deep into that darkness. The trick is to carry the light of self-awareness in one palm and self-acceptance in the other. The dark night is silken beautiful – the literal dark night, as well as the metaphorical dark night in our life – both are silken beautiful. Go forth and experience it. 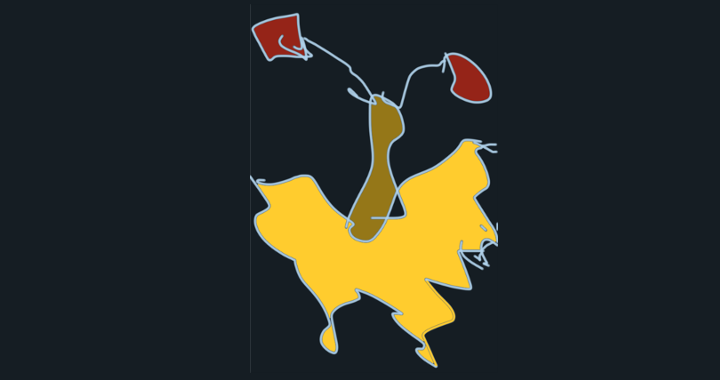 In 2008 I was officially diagnosed to have Multiple Sclerosis.
In 2017 I have now officially accepted the diagnosis, made it my own.

Yes the mind body connection is so deep and intrinsic that maybe two different words ‘mind’ and ‘body’ is a gross misconception. Yes thoughts do impact the body absolutely directly. Ever since I learned about the mind body connection, and learned to watch my thoughts and emotions, with almost every cough and sniffle I know which thought caused its onset.

Louise Hay cured her cancer totally by cleaning up the muck in her mind. The same thing happened with Anita Moorjani in a more miraculous, dramatic manner. Terry Wahls “fixed herself” by fixing her food. As I read these and countless other stories after being diagnosed with Multiple Sclerosis, I aimed for the holy grail too. Not only did I aim for it, I had touched it once. In communion with God when I was in Charlotte, I had experienced such good health, energy, vigor, joy that I had never experienced even in childhood.

However, Vani Murarka, in general is a person of low immunity. Not only does she get the cough and sniffles easily, there are various other things that are challenging for her, physically and mentally. Stuff that is not as challenging for other “normal” people such as others in her family and countless others on the planet. As I was focusing on “fixing myself” by cleaning my thoughts, I did not explicitly speak about these challenges to my family.

“I am going to free myself of them all”, I had implicitly told myself. The challenges and limitations. I really had freed myself of the invisible MS label I had begun wearing pasted on my forehead. I no longer had imaginary conversations with people in the queue such as, “Please let me go ahead. I have Multiple Sclerosis.” As if that explained everything. I got rid of that label and that pining, whining.

Now I hereby reclaim the MS label. I realize that by not talking frankly about my challenges, I have been doing disservice to myself, my family members and to every one really. When the need arises, I no longer have any qualms in saying, “I have Multiple Sclerosis. Hence for my rightful place in this event (whether that event is life or whatever) matters need to be adjusted thus.” When I state my needs, I help not just myself but others who also have that need but are not voicing it.

I hereby reclaim the MS label also because I realize I am not broken. So I don’t need to be fixed. The body’s health does not indicate the health of a person, surely not the spiritual health of a person. We all have our role to play. Threads in a grand tapestry.

On one end of the spectrum is Louise Hay, Anita Moorjani, Terry Wahls and others of their ilk who cured themselves of their respective ailments.

On the other end there are the likes of Ramana Maharshi who first got enlightened, then got cancer – and actively demonstrated to throngs who were there in his physical presence, how one can be in pain and be totally ok with it. He demonstrated this simply by being.

In between, there are all other kinds too, at every point of the spectrum.

There is one who met kidney failure and cancer and hip replacement with such grace and fortitude, that his mere presence must have been a blessing to the doctors, nurses, friends, family, as they went about doing what they were supposed to do, as they went about helping him. I know it is that way when I meet him even now, hail and hearty, and sweetness and light.

There is one who underwent an eye operation without anesthesia (because her body was too battered by other ailments to be administered anesthesia), all on the basis of mindfulness. Who knows whether it was the nurses and doctors attending to her during that operation or vice versa. She clearly did impact me – from a fat book, her anecdote is the only thing I remember.

There are all kinds. We all have our role to play. In every way that MS has weakened me, that weakness itself has become my strength. Each of those strengths are not for me alone. They are for everyone.

Till I was concerned only with myself, I wanted to touch the holy grail that Louise Hay and Anita Moorjani touched. I wanted to become so immune and fortified by my devotion to the one I love, that gluten be damned, I may consume even poison and still live and thrive as Meera Bai did. These were my aspirations.

If Vani Murarka tries to do what Louise Hay or Anita Moorjani or Meera Bai did, it is rather silly of her. So Vani Murarka shall be what Vani Murarka is. A cell in a vast, wondrous, single, whole organism.

What about Nirvana?
What about it? Like I said, no longer chasing it. Too much to be done. No time.

Image: “We Are Like That Only” digital art by yours truly.

evaluate not
your life,
per perceived norms.
there are many stories
you know not …

evaluate not
your life,
per perceived norms.
there are many stories
you know not.

no scale is there
to measure
your life against.
a wild flower
as many in the unseen woods,
or unique –
what you are,
you know not.
it matters not.

evaluate not, your life.
embrace it.
it is yours.
yours truly.