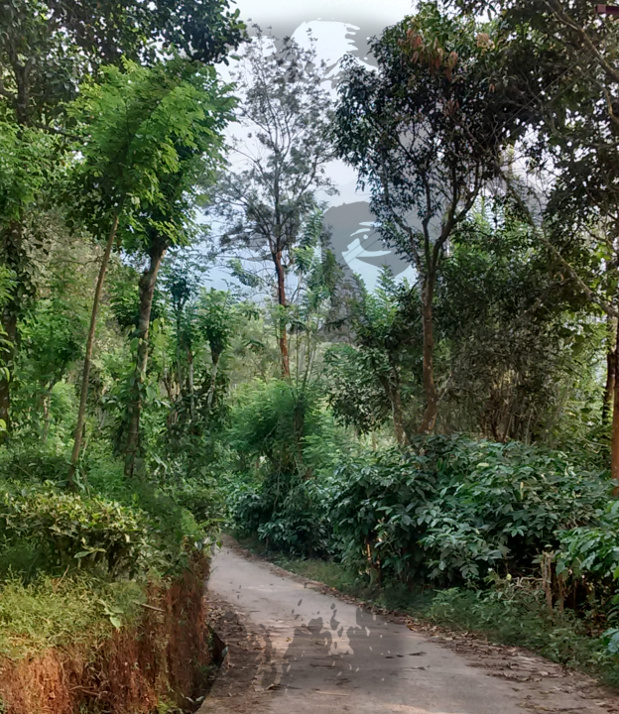 Just like Allahabad is the point of confluence of three rivers, (Ganga, Yamuna, and the chronically shy Saraswati), a small town in the Nilgiri mountain range is a confluence of three South Indian languages: Tamil, Malayalam, and Kannada. This town, though officially in Tamil Nadu, is right at the border of both Kerala and Karnataka. I was told that all the three languages are understood here. I did not find anyone who seemed to understand Kannada however. Maybe Kannada is like the invisible Saraswati of this confluence — or maybe the Kannada I spoke was Kannada only to my ears.

I was holidaying at my friend Amla’s home who lives and works in this tiny town, Gudalur, right outside the Mudumalai Tiger Reserve. Amla works for Wildlife Conservation Society that is involved with several projects and initiatives with the Forest Department. That day her boss called in the morning, asking for photographs of the “relocation project” she is handling, along with her standing in those photographs at the relocation site. He wanted the photographs that day itself. So we set out at the task.

This relocation project is meant to relocate not-so-wild humans (depending on perspective), the Wayanadan Chettis, from areas designated for our wild brethren — elephants, tigers, leopards and their prey galore. The elephants’ prey is just plants, so that is easy and peaceful (again, depending on perspective). The tigers and leopards are carnivores. So when a forest is a comfortable home for tigers and leopards, the umbrella species, it naturally becomes home for their grub too — a plethora of creatures — deer, sambhar, muscular gaurs, Malabar squirrels, peacocks and their laboring wives, (for I saw tons of peahens busy at the task of collecting food, but no peacocks), and many others.

The Wayanad Chettis do not particularly relish being eaten by tigers — so it is prudent that they vacate tiger land. In fact they asked the High Court to help them vacate, and Amla stepped in to do just that. These people have been living in these tiger reserves for the past thousand years or so, before the region was officially designated for tigers. However they don’t quite peacefully co-exist with the wild as the tribals of the region do. Sometimes they tend to aid poachers too. Also, when they need to get to the hospital, it proves to be distant and tricky for them.

One person’s work is another person’s holiday. Amla went to complete the assignment, I went with her holidaying. We drove, rather a kind gentleman Rajamani drove us, from Gudalur, past Ayyankolli, to the relocation site — the place where some of our not-so-wild brothers had been picked up and gently put down. If Gudalur is tiny, Ayyankolli is tinier. So then why am I mentioning it, you ask? Well my friend, Ayyankolli is the point of our story.

“I thought Tagore was the point of the story, and you haven’t even mentioned Tagore as yet, except in the title!”

Aah my friend, you observe and remember well. We shall get to Tagore too. In the hills the roads curve and bend. The tales of the hills must curve and bend too. As long as we don’t get car-sick, that is.

I did get car-sick though. The car stopped (I told you Rajamani is kind), and I threw up. We considered turning back. Maybe I was feeling a bit too relocated? But with the lunch out of my system, my baggage was lighter. I chose to continue on this free ride in the lap or greenery.

We reached the site. In a land I am told is mine (I did feel at home there), Amla spoke pleasantries and matters of import to those people getting used to their new homes, in tongues foreign to me. Amidst so much of natural greenery, this site had been thrashed bare of trees and modest lodgings of cement had taken sprout. It was not at all impressive to my cement weary city eyes. What this project is doing in tiger land is impressive however. After the project languished at the intent stage for 40 years, it is now in the process of giving about 700 acres to the tigers, and is making them a tad-bit safer from poaching.

I did the honors — I took a few photographs of the inwardly reluctant Amla at various points at the site, making sure the logo of Wildlife Conservation Society was visible on her official t-shirt. Then we were in the car again, heading back to Gudalur. It was 3 or 4 p.m. by then. My baggage that had been emptied by car-sickness, was no longer content being empty. Would we get some decent lunch to eat by the time we reached Gudalur? We were not sure. Was I willing to wait for another hour and a half? No.

So we stopped enroute, at a small canteen at Ayyankolli, for a basic South Indian saapad meal (except that they don’t call it saapad there).Tourists do not know about Ayyankolli I guess. Ayyankolli is not on any highway. Gudalur is bang on the Mysore-Ooty highway. However, both Ayyankolli and Gudalur are covered with coffee, tea, pepper plantations — and stealthy elephants who consider it their right to poke their curious trunks into the windows of sturdy homes built by humble humans, and consequently bring night into the room even on a bright day, by blocking the window with their enormous girth.

At the canteen, after we partook of rice, saambhar, sabzi (palyaa in the Kannada that was under hiding), buttermilk, omlette and sundry goodies on a pseudo banana leaf. Amla was conversing freely in Tamil with the canteen owner and it was clear that I was not understanding anything. Obviously I was not from near abouts. Upon his enquiring, Amla told him I am from Kolkata, Bengal. Soon, with the meal devoured, it was time to thank, pay and leave. It seemed like the owner was not taking the full payment for my meal. I thought it was because I had eaten such a wee bit of rice.

We sat in the car, and then Amla told me, “Your lunch was on the house. The owner said you are from the land of Tagore, so he wouldn’t take any payment for your meal. He loves the writings of Tagore and has read many works by him. He even named his daughters Urmila and Sharmila, from Tagore’s story Dui Bon (Two Sisters).”

He must have read Tagore via Tamil, Malyalam or English translations I conjectured. In a small town in the Nilgiris, there is a man on whom Tagore had left such an impact! As we drove back, to the peaceful night descending on Gudalur, I was filled with fresh admiration and respect, both for kobiguru and for literature in general.

Words travel far, in space and time. When birthed by a gentle yet strong heart, words nourish vast swaths of human hearts ― invisibly, as Saraswati is wont to do.

I share with you 4 lines I came across in Jaishankar Prasad’s Kaamaayani. (Jaishankar Prasad was an eminent Hindi poet and Kaamaayani is a celebrated mahakaavya of Hindi literature). These are the 4 lines, translated by yours truly –

We were not gods, neither are they –
All cogs in the wheel of change.
Yes, tie yourself up as a horse
To the pride-chariot, as you may.

Yes, we are precious, special, unique. Worthy of being honored.
And so is everyone else. and the gentle flow
of breath,
ever soothing…
if you hear it

Image Credit: In The Silence – pastel painting by Michael Z Tyree. You can view the full painting and purchase prints here. there is a light
burning in me
in the darkness
burning bright
calm steady
in the storm.
not triumphant;
conquered, no –
this light of my being brightens
up the world.

through drops of water
sunrays filter
forming a rainbow many-hued
and these rays
onto the earth
make flowers bloom
of many hues –
they seem apart
these happenings –
but in them
the law of Nature
is one, infallible
on this i rest
my faith unwavered –
science inspires
me through life.

vast is the universe
i am a speck…
but lowly, no.
mortal, i am
but feeble, no.
i am energy
taken form
i am my own identity
the never-ending
flow of force
as Newton’s laws
that is the truth
is beauty, grace, eternity.
this my faith
pulsating bright,
in my heart
there is a light.

The original Hindi poem “Jeevan Deep” can be read on Kaavyaalaya here.

Subscribe to receive “vani expressions” by email every Saturday and Tuesday.

not trees, raised arms
of the earth are these
seeking blessings every day
for you and me
~ translation from original in Hindi by Marudhar Mridul

a learned philosopher once came to town
the town-folk ran for some knowledge to own
handsome and quiet form, peaceful face –
with devotion all there his feet embrace.

they say “we hear, you have wisdom profound.
a few deep matters for us expound.”
philosopher says, “friend, why say wise?
‘nothing do i know’, that is all i cognize.”