It was quiet whole day long
I didn’t listen

It is quiet now, and I’m listening

The room is quiet
A night shade lights the room
Files download quietly, over there

Yes there’s noise
from these words
as I speak them in my mind
while I write —
to tell you of the quiet.

Make it in your place someday
Listen.

As he critiqued the book, this speaker complained that in too many prose writings these days, the writer is talking too much! 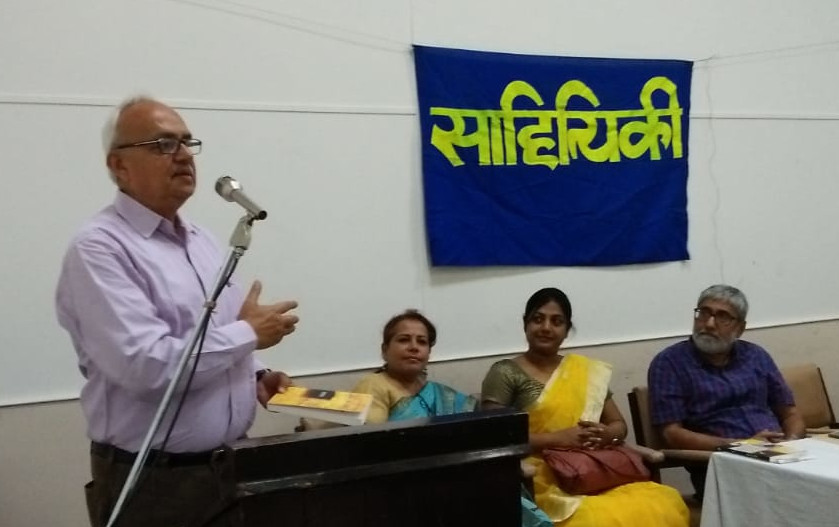 Yesterday I attended a book event at Saahityikee (a Hindi literature group in Kolkata). It was based on a book that has been published recently — स्याही की गमक (Syaahee Kee Gamak) — a translation of 32 short stories by established and currently active women authors from all over the world. The translation has been done by Yadavendra Pandey, a retired scientist and active translator based in Bihar. One of the good things about the book is that he has chosen authors and stories from nations that are not represented much in the Hindi literature world of translations. So there are stories in the book, by women from Iran, Nigeria, Sri Lanka, Estonia, for example.

Before the author himself spoke at the event, three people presented their critical talk on the book at the invitation of Sahityikee. When the first lady spoke, I was slightly disappointed. Firstly she was reading her prepared article, and her eyes were down 99% of the time. She wasn’t talking to the audience. Second, she focused on women’s lib, and that women should be liberated this, this, and this way. She complained about the first story which did not suggest a solution to the problem portrayed, and I was thinking, “Come on. All stories are not meant to suggest solutions and portray characters that evolve from being weak to empowered. Some can also just paint a small picture of how it is and leave it at that.” Of course, all parameters considered, we all operate at any given moment, to the best of our abilities, to the best of our knowledge — so no complaints regarding the first speaker — but as her talk progressed, I got the impression that the book only contains stories of नारी की पीड़ा (the plight of women). I started repenting having purchased the book.

The second speaker, a teacher / professor was speaking directly to the audience, so that was pleasant. Also, the point she was making was more balanced and interesting, so now I was paying more attention.

Then the third speaker, also a teacher / professor I think, highlighted some points that were really interesting. He talked of the technical aspects of the first story in the collection. First, that the story relates a time span of only 10 pm to 11:55 pm of a particular day — this in itself is so interesting. Movies have been made relating events of one day etc., but this story spans only 2 hours!

Second, he highlighted that in this story (and many other stories of the book) the author is not talking. The Iranian author of this particular story, is a script writer anyway. The story is written in the form of a script, and script writers do not have the liberty to speak themselves, i.e. they must only relate what is happening, and only their characters are permitted to talk. As he critiqued the book, this speaker complained that in too many prose writings these days, the writer is talking too much! “लेखक आजकल बहुत वाचाल हो गए हैं। वे हावी हो जाते हैं।”, he said. The story, characters, setting take a backseat and the writer is too intent to put forward his opinion.

This is an oft-given advice for honing our creative writing skills — ‘Show, Not Tell’. The more an author can show (via her words) what is happening, rather than telling, the more effective a piece of writing. So for example, it is much more effective to write ‘She shivered even under the thick coat’, than to say, ‘It was very cold that day’.

As the speaker continued, I realised, this is one of the big reasons why I am not writing these days — to evolve one’s writing from mere telling to actual showing is hard work! Without that, the writing often feels too insipid. The speaker also highlighted some stories in the book that were not about women, such as the story of a small Lama boy who befriends monkeys, written by an author from Sri Lanka. This story had become very successful and soon found its way in textbooks there, but was later withdrawn because the Buddhist community chose to get offended by the story. I started looking forward to reading the copy I had purchased — not because of caretakers of religion taking offence mind you, but because it was good to know that there were stories where the woman and her social plight was not the focus.

The translator himself, Yadavendra Pandey, came next. He shared how he chose the stories for the book and how he read several works by the original authors and saw interviews with them to tune into their thinking and cultural context. He also he shared his process of translation which is essentially a re-creation rather than translation. This explained why all the stories in the book seem to be written by the same author, a point made by the third critic, despite such a wide variety of original authors and countries having been represented. Yadavendra ji also spoke of some of his future projects which all sounded worth looking forward to. I discovered that he first started his translation journey by translating poems. So I have to track down some of those poems and see if I like any for Kaavyaalaya.

It was an evening well-spent and I am glad and grateful that I can stay in touch with Yadavendra ji now (if I put in the effort to do so). As regarding this book — it is to be seen whether I like it (or not), (if I put in the effort to read it). If it turns out to be an effortless read, then great! Right now, thank you to Sahityikee for organising an enjoyable, fulfilling evening — for widening my window to the Hindi world.

Your age is the same, my love.
Still the same innocent child.
You were born, who knows when.
You seek what you seek.

For that which you will not get —
Let your heart grieve.

Then, you shall receive.

I float in Your power
boundless
And Your arms
encircle me
Two black, two white —
and so the dance
of duality
is not a challenge.
It is my haven
It is You.

I float in Love
infinite
I live in You.

The 3-D roundness
of Your body, and its shape,
and its weight,
as those legs
keep these legs in check…
let my senses drink.
These fingertips, let them caress
Your being.
Let me smell Your sweat
as I did that day.
Your voice in my ears ―
let it water my deepest being.

Oh! Where are you?

This thirst in drips
keeps me alive.
Give to me the waterfall.

Now that the day is done
There is only You and me.

Now that the day is done
There is only You and me.

The night is precious
For it brings
You and You and only You.
You who are forever here,
How precious that the night
Still brings
Just only You.

There is every moment left
To love You by and by,
For now, I shall kiss the night
How sweet it’s gift,
Then maybe I shall also kiss
You, but just a tiny bit.

My heart, my lips
My every cell
Are all so busy loving You.
Where is the time?
So my love, for now just this
Just a tiny little kiss.

You are the place
and the moment
where
everything comes
to a pause
for a moment.
…

You are the place
and the moment
where
everything comes
to a pause
for a moment.

You are the place
and the moment
from where
everything forever flows.

You are the place
and the moment
where
words die out
silence remains
and words are born.
Where I am born. 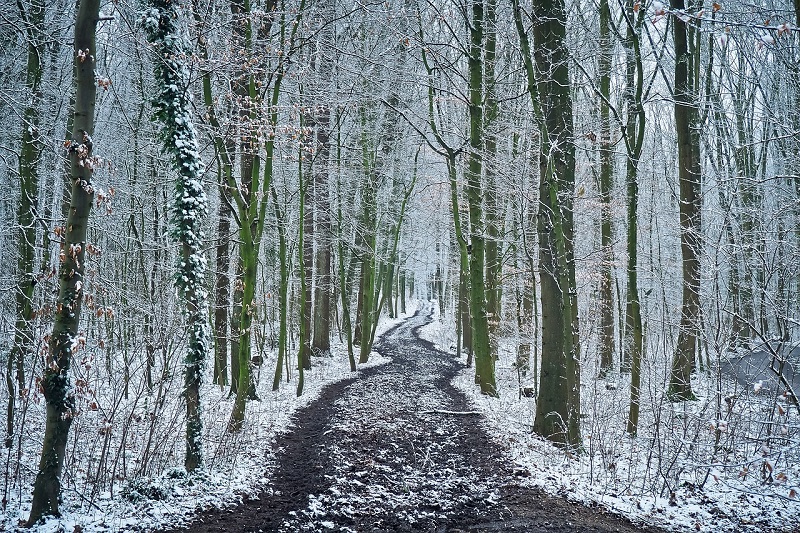 Does the tree cry inside,
as it grows,
pushing aside the very earth
that nourished it?

Touch the bark
of a tree.
You will know
many unknowns.

Work happens in the night
when its stark
and its chill
and we are shorn.

Come on, come on!
Let’s be a tree!
Let’s gather round
Into a field —
Privately. 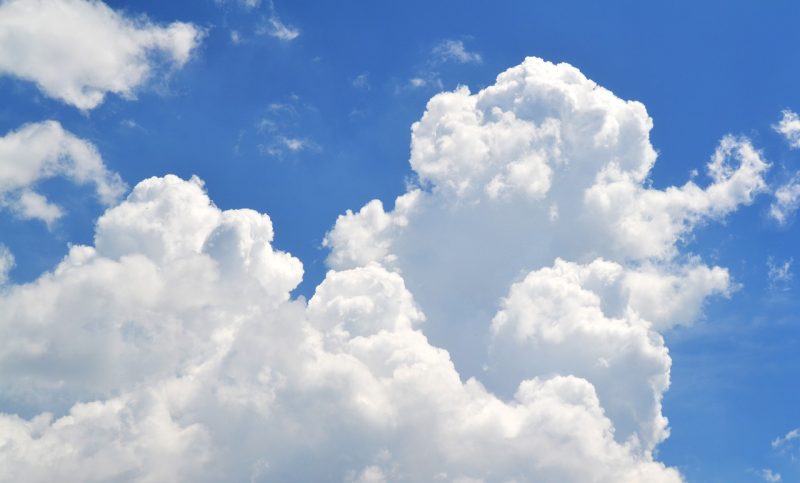 I shall go the way I’d gone
as a child, to the sky.
I shall let it blow my mind
To smithereens.

“But you’re so intelligent!” they say…

This I do not understand
This exclaim, “You’re so intelligent.”
“So what?” I say.

“Serve! Do your duty!” they say.
I cannot see who I can serve.
Each and every being perfect ―
Who do I serve?
Tell me, how to serve the sky?

If there’s something at all amiss
In this world, it is this ―
You don’t see beauty ― it is
Everywhere.
Yet, *you* are beautiful.

Not urgent, it’s important though ―
See beauty
It is everywhere.

As for me
I shall be me
Just as the sky
Is just the sky
Nothing more.

About “Important, Not Urgent”
Things that we do, or have to do, fall under four sections of the urgent-important matrix. The “Important, Not Urgent” quadrant is the quadrant of quality. Those activities improve the quality of our mind, body, and life.

Seeing beauty is very subtly important. The benefits it brings is deep. The world is waking up to the importance of meditation. Seeing beauty is the easiest way to meditate.

To see beauty we need not go on a vacation. Beauty is everywhere. Here is an article that expands on what beauty is and examples of how it is everywhere. 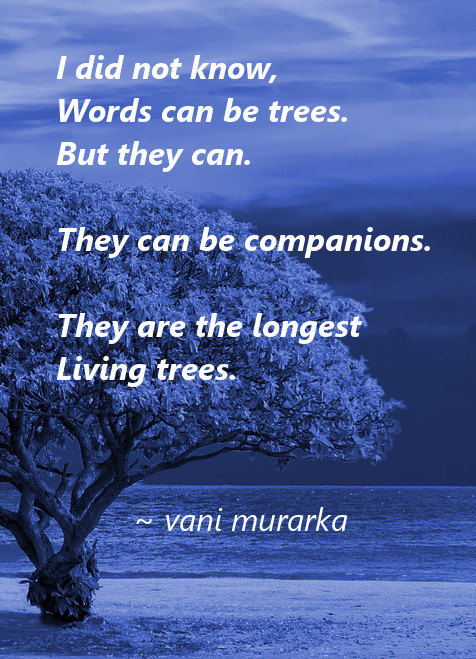