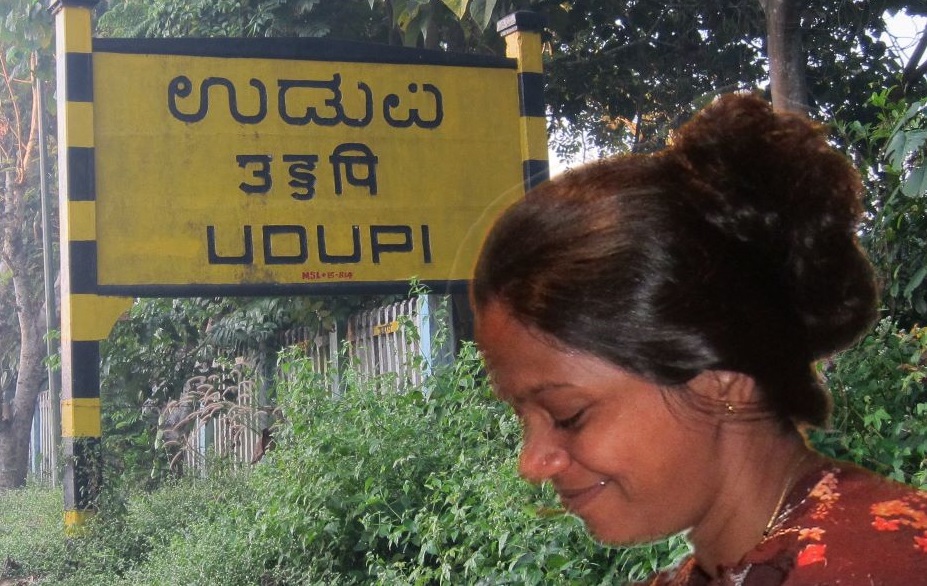 There is a lady in Udupi who happened to be my maid there. We also happened to become friends. We used to go around together – she, her daughter and son (if he was in town) and I, sometimes to the beach, or Venugopal temple, or Manipal Lake, or Domino’s Pizza. Piggybacking on my friendship with her I got to eat sumptuous meals in temples at a lady’s god bharaai (baby shower), or when a respected man of the locality passed away – events that otherwise I would have had no inkling of.

When I was packing up from Udupi-Manipal, Bharti (my friend) asked for my fridge, so I gave it to her. We are still in touch over phone, for which the credit goes largely to Bharti. We were talking on New Year’s eve and she related – her son had been saying, ‘If Vani Aunty was here we could have gone out somewhere.’ (my car being the advantage) and her daughter pitched in, ‘We wouldn’t have the fridge then!’

I burst out in laughter when I heard this. Bharti’s daughter is such a straight-speaking darling and Bharti is a lady of such gumption! Her husband committed suicide so now she is a single mother, who lives by working as a maid in several homes and by cooking the mid-day meal at a school.

“I cannot bear physical pain”, she says “but finances don’t trouble me. I know I will manage somehow.” This I have seen first-hand – her fantastic ability to manage her finances. She was building a pakka bricks and cement home for herself to replace her mud house and for this she took sundry loans from the various households she works for, in addition to some loan from the bank. As construction progressed, she had complete clarity of things without the aid of any pen or paper – expenses incurred, expenses to be incurred, loan amounts repaid, still to be repaid – everything – with no mistakes, no confusions at all! As I used to watch her loud think her calculations I used to marvel, ‘wow! Pa would love to see this’. “You should always have a decent ballpark idea about your finances without having to look at records”, my Dad says. Dad asks only for a ballpark idea, Bharti had it down to the rupee, all in her head.

“I need to build my house, I need some money please” (or its my daughter’s wedding, or someone needs medical treatment, or whatever) – when domestic help asks for financial support there is invariably a beseeching in their voice and expression, a deen bhaav. Not so with Bharti. She just stated to me, “You give me three thousand rupees.”

To save on transportation costs she asked me for help to get cement and floor tiles in my car. Some cement powder fell and soiled the back seat. Had it been someone else, with remorse painted on the person’s face the person would have ardently apologized, “Oh! I am so sorry!” Friends had helped me with their car when I was in US and I would have had that same remorseful pitiful demeanor and self-consciousness if I had spilt something in their car. Not so with Bharti. What a wonderful literal demonstration of ‘don’t cry over spilt milk’ – she laughed out and said, “aap bhee kyaa yaad rakheinge – Bharti kaa cement meree gaadee mein giraa thaa” (One more sweet quirky memory for you to have – Bharti’s spilt cement in my car). That was so refreshing! The very natural self-worth and total absence of being pitiful.

When her husband passed away her in-laws made every effort to push her out of the house (that is her side of the story) but she stuck her ground and even got the police to intervene for her rights. Now she lives independently in a small house adjacent to her in-laws’ house and continues to maintain complete relationship with her in-laws and their extended family – be it daily interactions or festive occasions. All this when she does not even belong to that region natively. She is a Maharashtrian whom her Kannadiga Tulu speaking husband had wooed to come to Udupi. She taught herself Kannada and Tulu from scratch and made herself blend seamlessly in the local culture and customs. The pleasure of having someone to converse with in Hindi is one of the basis of our friendship.

She talks wistfully of her childhood in her village near Bombay and speaks of visiting Bombay and her village someday. Ever since her marriage, she has not gone back even once and it seems to me that maybe she never will.

He works for a pathology clinic. If you ring him up, he will come to your home to collect blood samples for the blood test that your doctor has prescribed. 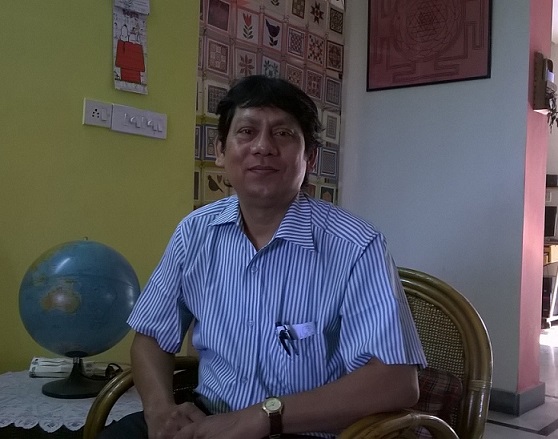 I used to think Kolkata is not a place of work ethics. It felt like the only time when one can see an overflowing of dedicated work is during the Durga Puja, or in the beautiful artistic show-off world of the Kolkata Marwaris.

Recently I am came across an example of dedicated dependable yet understated service that is so inspiring.

He works for a pathology clinic. If you ring him up, he will come to your home to collect blood samples for the blood test that your doctor has prescribed. His name is Tapan. The charges for this at-home blood-collection service depends on which part of the city you are in. Where we stay, in Hastings at the banks of the river, it costs Rs. 250/- or so (in addition to the blood test charges itself). For Salt Lake, the rate is something like Rs. 500/- if I remember what Tapan Da told me right.

Tapan Da’s dependability is exemplary. My family has experienced it again and again. Say you ring him up on a Tuesday evening, his Wednesday schedule is full and he says he will come on Thursday morning at 9. Since he said so, he will be there on Thursday morning. You do not need to call him again.

This might seem like but-obvious for someone who lives in cultures where such dependable service is the norm. For a Kolkata service provider, this admirable. If I have come across one such person, I am sure there are other such examples in Kolkata too. Thanks to him, Kolkata is not a place of shoddy service in my eyes anymore. It is simply that some provide good service, some do not. It is possible to provide service at the level you want wherever you are.

If you call Tapan Da on a Saturday evening, requesting him to come on Sunday morning, often that works too. Four other people are also employed by this clinic for similar at-home service, but it seems Tapan is very popular. Once he starts going to a house, people prefer him to come, rather than any of the others. The routine act of drawing blood from a person’s vein is also a skill to mastered, else it is possible to rupture the vein and cause a blue arm that lasts for up to a month. At our place, he is the but-obvious go-to point for all blood test requirements. Seeing him come so often, my 7 year old niece was also able to overcome her fears and give her blood for testing. Yes, her brother had to sit beside her for moral support. 🙂

His ability to show up as promised is despite the fact that his day is often full with many visits scheduled across the city, which he fulfills zipping around on his motor bike. Unlike many at-home service providers who seem grimy, he presents himself in professional clean garb that feels respectable. Of course the sweat and grime of the city is not selective towards him. Nevertheless.

His service is a thing to be experienced. There is nothing flashy about it but I was impressed enough to write to you about it. For it quietly grows on you.

The normal thing would be for him to come and go unnoticed, unacknowledged. This time I happened to be around, so I greeted him. …

The man who reads the electricity consumption meter came. The normal thing would be for him to come and go unnoticed, unacknowledged. This time I happened to be around, so I greeted him.

He was carrying a credit-card swiping kind of device in which he keyed in the meter reading. He then pressed a button and a print out of the consumption bill for previous month tongued out. I got quite impressed (and excited) to see such nifty technology deployed out here. Sometimes I am like that – getting excited at seemingly normal stuff.

No issue of mailing the bill to customer addresses. These devices get loaded with the bill data when the processing is done at the office and the new reading recorded in the device is downloaded to the servers when these people go back to the office.

So, (since I was excited), I asked the man if I could take a picture of his with the device giving out the bill. He said yes, but seemed hesitant. I took 2 pics of his. He looked even more hesitant and asked where I will put it. Will I put it in the newspaper? I said, “Oh no! I will put it on the internet. If you are uncomfortable about it, I will not”.

He shared with me his reason for being hesitant. I understood and said, “Oh ok. Then I won’t put it”.

“You can take a snap of mine when I come next month and put that one”, he said. We agreed on that and he left.

5 minutes later, he was back. “Madam, madam!”. I went out. He: “I will come tomorrow itself. I have some work here, you can take my snap tomorrow.” Amused at his eagerness, I smiled and said, “Ok, sure”.

Next day, there he was. All ready for the photo shoot. I took 2 photos. He wanted to know if he can see it on another computer after it is published. I said yes. He asked for the address. I said it will be generated only after I publish it. So we parted upon the agreement that he will get to see it next time he comes.

My momentary appreciation of the technology deployed had predictably worn off in a few minutes itself. However, it was just so sweet and endearing – his eagerness to fulfill my request and to see his photo published. He was eager yes, but there was a decorum about him. No expression of excitement.

So, I just have to share his photo with you – and I happily await sharing it with him next month.

Sweet simple human encounters. Simple connections to be grateful for.