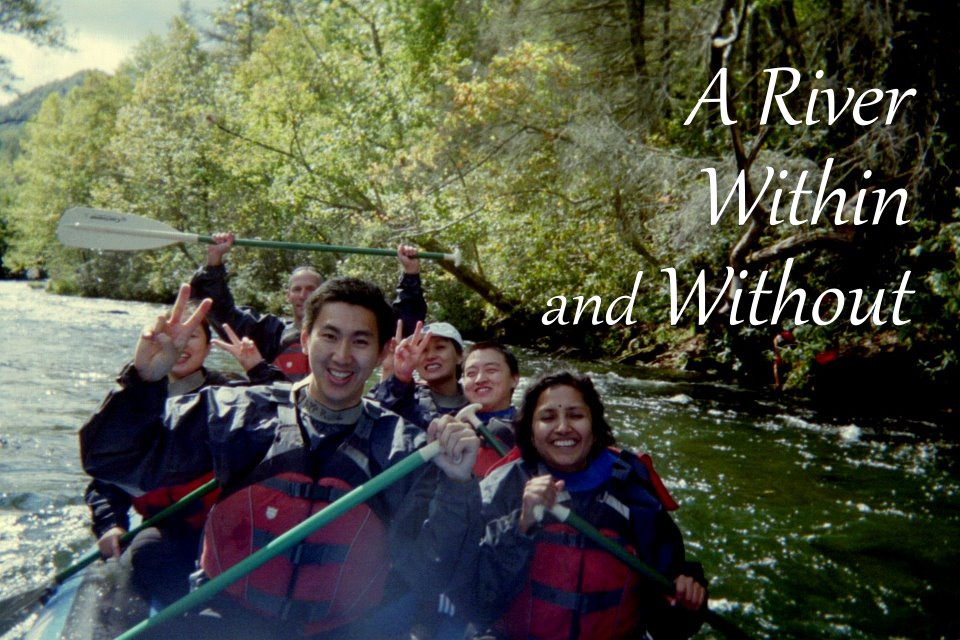 Write about the white-water rafting experience in Charlotte.

It is hard work – one-sided writing where only I am relating. How about you ask me questions (even though you know everything)?

I heard that you went white-water rafting in Charlotte. How did you manage that? You know, with MS and all.

I’d had enough. I’d had enough of being low-stamina. I wanted to live. I had been feeling better than a year back anyways. So I just decided to go for it and I am really glad I went. What I experienced on the river was of course soothing and exhilarating at the same time, but what I experienced on the ride back in the van – that was utterly sublime. That in-the-van experience makes that trip so memorable, so precious. Then the next day it was Sunday. Of course, I was tired. It had been physically strenuous, so I simply rested. There was zero mental agony or emotional frustration. The body needed rest, I gave it rest. Simple.

तुमने तो पूरा trip cover कर लिया – घर भी लौट गई, आराम भी कर लिया. I did not get to know anything about the on-the-river or in-the-van experiences. So now which one will you tell me first?

Let’s start with a bit of context.

Charlotte is a city in North Carolina USA. I was living there as a student at the university. After spending three years in frigid Iowa, it was pleasant being somewhat closer to the equator where the summer evenings are quite similar to Calcutta evenings. The East coast and Myrtle beach on the right is 4 hours drive from Charlotte, and the Appalachian Mountain Range on the left is just 2 hours drive from Charlotte.

A church at Charlotte had organized a white-water rafting trip for university students. Various churches in USA help international students and scholars to settle into the country. They help in crucial practical ways such as giving furniture for free. Also, they organize events in and near town because in coming to a new land many students and scholars do not have much of a friends group and social life.

I am so grateful to the church for having organized this and to Dave Weekly who took us on the trip. There were probably two others too, managing the group and driving other vans (there couldn’t have been only one van), but I only remember Dave as the organizer because I was in the van he was driving, and on the boat that he was navigating.

It was beautiful – the greenery, the crystal clear water, all of nature so alive and pure. Yes, the water was rapid. In one place it was really strong. But despite such rapid waters, there was one man going down the river standing alone on his raft, navigating with a pole. That is the picture I cherish the most from on-the-river. It is so beautiful to be so one with nature as that man on the raft was.

I fell off from the boat once. That was fun. It was fun because it didn’t get serious. I was rescued pretty soon. My friends (fellow university students, boatmates rather, for I didn’t really know anyone much) hauled me back in, pulling me by my life jacket. Whew! That was something! For the few moments that I was in the water, it was quite an experience. The water was so strong. I was totally helpless. The rapids were shoving me under the boat itself and the weight of the boat was further pushing me inside the water. Exhilarating!

Like I said, because I was rescued soon enough. Else, there would have been nothing exhilarating about it. Further down the river, from another boat in our group, a few other students had also fallen into the river. That was a bit more serious and was quite a scare for those students and others in that boat – especially for the trip organizers. Fortunately though, those students were also rescued after that initial scare and tension. It is quite a skill managing the boat in the rapids. At times just remaining seated in the boat becomes a challenge.

The whole thing was physically very strenuous. When we were all done changing and had boarded the vans to head back to the city, everyone was tired. Each muscle in my body was aching. We stopped at a highway deli to parcel food to-go before the long drive back. I went and bought myself a sandwich and came back to the van. Holding the sandwich I tried to haul myself up into the van but fell down – the body was so fatigued.

Now don’t you go about thinking that I keep falling here, there, everywhere. Fell out of the boat, fell down in getting into the van. The former was because the rapids were so strong, the latter because the body was exhausted.

I get it. Both a result of the laws of physics. You never fall down. You never can fall down – for you are forever in my arms.

Thank you. That is very sweet of you. Now let’s get back to the story at hand –

I was worried. How will I drive my car back home, that I had parked in the university campus? Will I have the energy to focus as needed on the driving, will I reach back home in one piece? It seemed quite likely that I might end up crashing the car somewhere. These concerns were simmering on low volume in my mind as I sat on the back-seat of the van. I did not even have the energy to be actively worried.

Everyone in the van, in their tiredness, had dozed off — all the necks drooped in a variety of directions. Dave was driving. He was the only one who had not dozed off. He had been on the river too. He must’ve been dead-tired too – yet he was focused on the road, focused on getting the van and all its trusting passengers safe back to the city. Where did he get the requisite energy? It was all because it was his offering to God. He was doing this because it was the church’s initiative. It was the church’s initiative because it wished to welcome the international students and scholars into the beauty of this land, share a fun activity with them that they might otherwise not be able to organize on their own.

Often during meditation, the mind is fidgety and eager to be free of restriction, eager to be free to gallivant. This time, attention and focus occurred easily. Once I was done moving my attention from the base chakra to the crown chakra, I naturally moved into an immersed state. I do not know how long I was in “that zone”, a few seconds or several minutes. Only when I came out of that state did I realize I was in some kind of an immersed state. It was not the normal sleep, I know – for my neck and head had not drooped into slumber. When I came out of that state, the gnawing tiredness and body ache had gone. I was alert and fresh and enjoyed the peaceful remaining ride back to the city, for everyone else was fast asleep. Only Dave was at the steering wheel in the front of the van — steadfast. On reaching Charlotte I was able to drive back home with no problem at all.

It was amazing, the transformation that had occurred. This experience remains in me as a direct evidence of the immense power that exists within us. I am not able to tune into myself in this manner often, but it is good to know that it is always at hand. Yes, for me personally, at times a moderate amount of physical pain aids meditation. It gives me a physical sensation to focus on that is not as subtle as focusing on the breath. That evening I was so tired that the mind did not have any energy to gallivant. It seems that aided in the tuning-in too. The next day I rested the whole day, peacefully, without any suffering.

This is what happens when

That's All "It" Asks
Hopping, Skipping, Through The Garden of My Mind
Dumb Employee. I've Decided To Become One

One thought on “A River Within and Without”