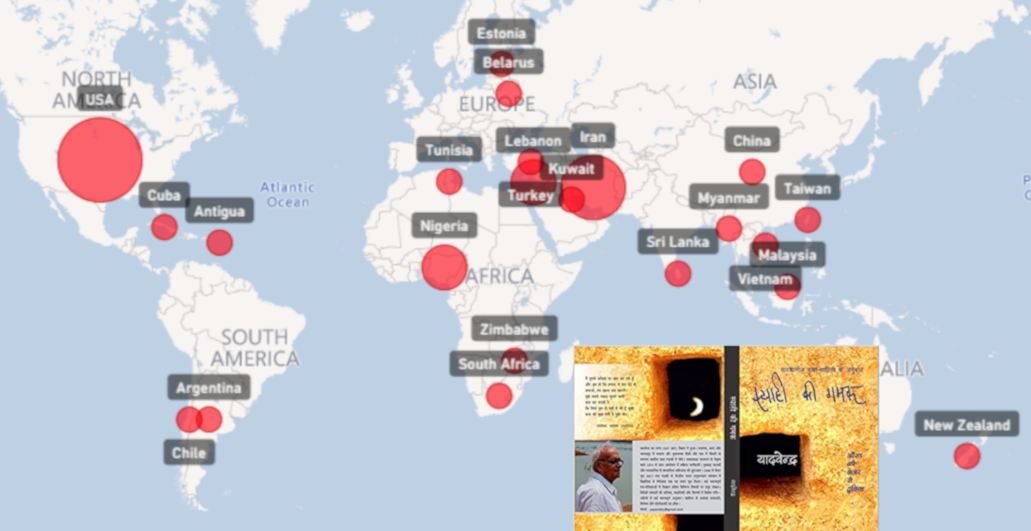 It is easy to lay our hands on stories from USA, UK and the like – but what about stories from countries such as Chile, Lebanon, Malaysia, Nigeria, Argentina, Belarus, Tunisia, Eritrea? Did you even know of a country called Eritrea? I did not. But that country and its people also play a crucial role in making our planet what it is.

Recently I had the good fortune of meeting 32 wonderful ladies from 24 countries thanks to a Hindi book Syaahee Kee Gamak (meaning The Fragrance of Ink) by Yadvendra Pandey. This is a collection of 32 short stories by 32 women authors from 24 countries translated into Hindi. These are writings by contemporary women authors who have been significant voices of protest against the status quo in their local societies and our collective global society. These are agents of change that we would not easily hear of for we don’t generally bother about these countries (other than to seek exotic holidays), or such voices. That this is a Hindi book, bringing this wide exposure to a Hindi audience, makes it even more significant and crucial.

As soon as one picks up the book and starts flipping through it, it becomes evident that immense hard work has gone into putting this book together – both in the prior research and finalization of stories and in the actual work of translating the final selection into Hindi. That Yadvendra ji has managed to create a beautiful bouquet of sense and coherence out of the cacophony of the internet and social media makes his work even more commendable. In doing so, he enabled me to connect to the heart-minds of ladies in far-flung countries writing in myriad languages. I am so grateful for that. I felt enriched. I feel that my horizons have expanded, and in doing so, it is not at all surprising to find, yet again, that we are all essentially the same.

Initially, the most rewarding thing about the book for me was the introduction text about each author that precedes each story. Each of them achievers in their societies and chosen fields. Reading about these women from these lands, it felt like I am connecting to them – this pulled me in to continue reading. The stories that have been selected are all excellent too. Most of these are second-order translations – i.e., the original language is not English and Yadvendra ji has translated the English translations into Hindi. Even then, the beauty of the language, structure, thought, plot, expression all shines through. This speaks to the skills of the first-order English translator, the second-order Hindi translator and the art and craft of the original writers.

What guided the selection of these stories? What ties them together? A short poem on the back cover of the book answers that question –

I am talking to you about poetry
and you say
when do we eat.
The worst of it is
I’m hungry too.
~ Alicia Partnoy (Argentina)

That is the thing – a simple message – that there is a lot else that women are also interested in, hungry for, other than food (and sex).

Yadvendra Pandey has, for years, been interested in creatives who protest the status quo – consuming content from literature, plays, film, social media, even spoken poetry and Black rap. What a fascinating change from his previous avatar as Chief Scientist at CBRI Roorkee! As he followed these creatives through various avenues on the internet, he was especially impressed by the thinking, expressiveness, decisiveness of women at a global level. He felt it was important to bring their voices to the Hindi world, especially since, in contrast, he felt that women authors in Hindi were largely restricted to writing only of freedom of the body. This is not the best representation of global female literature, Yadvendra Pandey makes sure he clarifies, just the best out of what he has read – vignettes of what world is, as seen through the eyes of (some) women.

Yes, some of these stories can be labelled as feminist, but they are just matter of fact (yet beautiful) accounts of how things are. They are not screaming out anything in opposition to anyone. I generally cringe from feminist writings because I dislike the chronic wearing of the victimhood cloak. Even then, many of the stories touched me. Then there are several stories which are not about the experience of women per se. There is a story about a man who works in a censors office during the height of political conflict (in Argentina). His initial objective is to make sure a letter that he has written gets through censorship, however, sincerity at work is so intrinsic to his personality that working diligently totally ends up brainwashing him! There is a story about a boy servant from rural Nigeria who has curious ways. When his domestic employer gives him the choice to go out into the world and make a life of his own, this boy chooses to join the army. However, his life steadily rots away, again due to political conflict and regimens making inhuman use of army personnel. His plight unfolds via letters he writes back to his boyhood employer.

One story that I especially liked – The Fear of Ghosts, from Myanmar, by San San Nweh – paints a poetic picture of an evening in a slum. It is hot and humid, there is load shedding, people are sitting out of their tiny dwellings to get some breeze. Children and young boys are playing, and a mother is apprehensive of mishaps via snakes or other dangers in the dark alleys and corners. She tells the children to go play in a newly constructed park nearby. The children refuse to go. Snakes and other dangers in dark alleys do not worry them, but they are petrified of going to that park. It is just round the corner but it is an alien and dangerous world nevertheless, because this park is a part of a more affluent society and they intuitively know that they are not welcome. In fact, they cannot forget a friend who had been killed there. They can still see his ghost near the park that reminds them that they must not go there. That simple, nice, new park of the city is not for them.

But net total, my takeaway from the book was one story – Woman and Cycle, by Bridgette Atkinson from Britain. A woman learns to ride a bicycle. This gives her a new freedom and she loves to go riding. Her husband is uncomfortable about this and follows her discreetly one day. He finds that she goes to a secluded rocky place nearby, very green, with a narrow stream flowing. He is suspicious of his wife. Who is she going to meet? However, he finds that she is dancing – alone, in total joy with herself and nature. Startled by what he sees, he quietly returns home.

One might take the message from this story that yes, see, husbands oppress their wives. Society is so cruel towards women. A simple joy of riding a bicycle is a hard-fought freedom for a woman. But the message I take from the story is that, yes, see, live your joy. The simple act of living your joy can transform people – for surely the man who returned seeing this beautiful, divine facet of his wife, must have gotten transformed. How did that seeing change him, we do not know, but he changed – this is for sure.

Read the book. It is totally worth the time and money to connect to the voices and minds of these ladies from distant lands. If you primarily read Hindi, then surely read it. If you know how to read Hindi, but do not primarily read content in Hindi, then give yourself a gift – visit Hindi once again via this book, for the language is easy. This way or that, it is worth it.

6 thoughts on “32 Women from 24 Countries, and One Beautifully Researched Book”