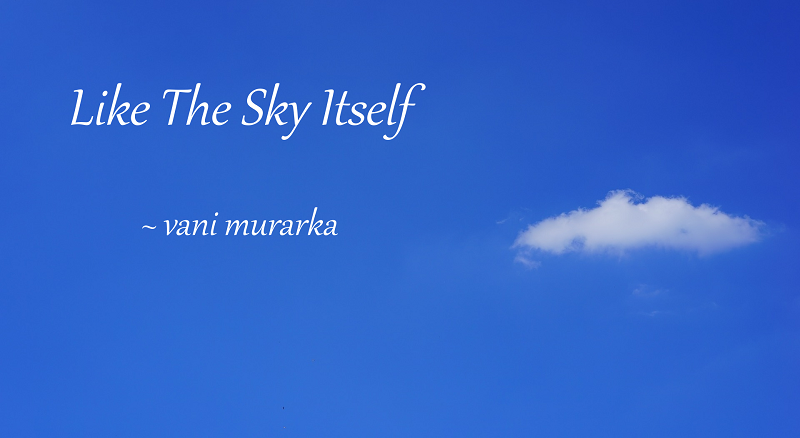 This is in continuation from the post “The Grasslands Bristled“

When she was done dancing to her heart’s content, she sat down to eat breakfast — experiencing each juicy bubble of the blackberries in her mouth and as the juice descended down her throat. She felt the cool invigorating energy of the carrot-saag drink rise up to her eyes. Then she went back inside. Her muscles were alive with contentment, alive with the heat of the sun that they had received with open arms. She lay down on the bed to sip on this life force a bit more with the straw of awareness, and soon fell into an alert yoga-nidra —

“It seems to me like you are a star in the sky who looks down on me, a flower on the land here,” she said.

“Have you heard the story of the lotus flower in the sky?” he asked.

“No…” she answered, with mild curiosity.

Neelkamal, the lotus flower in the sky

Neelpari was a blue fairy. She was very pretty. She had beautiful blue wings and was very graceful. She was sweet and had a serene and comforting personality. She had no malice in her heart towards anyone. However, all other fairies in the fairyland had sparkling red and orange colors. They thought Neelpari was dull and ugly. They were all very playful and would sing and dance all the time unlike Neelpari who was quiet most of the time. When they went to a garden, as the fairies do everyday, they would play with only the fresh blooming flowers. On the other hand if Neelpari saw a sad flower, she would sit with that flower and try to cheer him up all the time. The other fairies thought Neelpari was strange and not fit to be a fairy.

One day all the fairies had gone to a garden that had a small muddy lake. Poor Neelpari fell into the lake and was trapped in the mud. Other fairies did not even bother to help her. They played with flowers as usual and, at the end of the day, flew back to fairyland leaving Neelpari trapped in the mud. Neelpari felt very sad and dejected since her friends had deserted her. A drop of tear rolled from her eyes and fell into the lake.

That drop of tear flooded the lake with motherly love. The lake said to Neelpari: “I wish I could help you get out of the mud but I am unable to do that. However, you are so sweet that I would adopt you as my daughter and you can live with me.”

Neelpari had lost all interest in going back to the fairyland where the fairies did not care about her. So she gladly accepted to be adopted by the lake. She then became Neelkamal, the blue lotus. Every day the waves of the lake would play with her and caress her soft blue petals. Because of her, the muddy lake itself became beautiful. People came and admired Neelkamal and the lake. Many bhramars (bumblebees) came in the day and sang to her. Neelkamal was very happy with her new life.

Like all lotus flowers, Neelkamal used to close her petal like eyes in the night and go to sleep. One night, a star in the sky saw her and fell instantly in love with her. After that every night the star used to watch her pretty face but he could never see her awake. He had a strong desire to see Neelkamal awake and peep into her pretty eyes. But that was not possible, since the stars are not allowed to come out during the day. The sun is the king of the sky. He is hot-tempered and does not like to see the stars when he is awake. Only when the sun goes to sleep, the stars can come out.

The king of the night sky is the moon. He is kind and gentle. He noticed that the star has been quite depressed for many nights. He asked the star if there is a problem. The star told the moon about his love for Neelkamal and his strong desire to see her while she is awake during the day. First the moon said that it is impossible because the sun will never allow that. If the star ventures to come out during the day, the sun will burn him instantly. However, the moon was moved by the star’s love and wanted to help him.

“There is only one way” said the moon, “I can block the sun momentarily causing a total solar eclipse. During the total eclipse, the stars can come out and lotus flowers are still awake. So, during those few moments you can come out and have a brief look at your beloved Neelkamal. However, you must remember that the sun is too big for me. I can block him only for a few minutes. You must, absolutely must, go into hiding before the eclipse is over.”

The star was very happy with that suggestion and readily agreed. The moon warned the star again that he should not stay in the sky when the eclipse starts clearing. The star promised to do that and waited for the next morning.

True to his promise, the moon blocked the sun next day, which caused a total solar eclipse. The star came out and, for the first time, looked at Neelkamal in full bloom. Her beautiful petal-like deep blue eyes were wide open. The star had never seen such a heavenly beauty. Neelkamal looked at the star for the first time and also fell in love with the star. Both kept looking at each other and were totally overwhelmed by their mutual attraction and love. The star forgot his promise to the moon. In spite of his best efforts, the moon could not block the sun any longer. He had to move off and the sun returned. A solar eclipse never lasts for more than a few minutes.

The sun was furious when he saw the star. He immediately released his full heat on the star. The poor star was immediately burnt. His ashes fell all over the earth. Neelkamal was terribly shocked to see her loved star burnt to ashes. She felt so dejected that she wanted to shed off all her petals and just vanish into the lake. She decided that she would not let anyone see her since her lover gave his life in an attempt to see her. The lake also felt very sad and tried to console Neelkamal. When the rays of the sun came to the lake, the lake told them about Neelkamal’s tragedy. The rays used to see Neelkamal everyday and they liked her. Moved by her tragic story, they took Neelkamal with them to the sun and told him about Neelkamal’s desire to disappear.

The sun also felt sorry and apologetic for his anger. He said to Neelkamal, “I am very pleased and impressed by your true love for the star. I am sorry that I got so annoyed and burnt your love. Unfortunately, I cannot undo what has been done. However, I will give you a boon. From now on, you will live in the sky as the symbol of eternal love. Every particle of your loved star’s dust on the earth will come alive and glow with your love. Since you are blue and the sky is blue, nobody can see you except those who are lucky to get a particle of the dust of your fallen loved star.”

Something stirred inside her, bringing her out of the yoga-nidra.

One thought on “Fiction continued: Like The Sky Itself”